Two inmates at all-women’s New Jersey jail are PREGNANT after both had sex with transgender prisoners: ACLU won battle to house 27 trans inmates there

Two women at New Jersey‘s only all-women’s prison have both fallen pregnant after having sex with transgender inmates.

The pregnant women, who were not identified, are housed at the embattled Edna Mahan Correctional Facility, in Clinton, which New Jersey Governor announced plans to close last year.

Prison bosses said that in both instances, the sex was consensual.

NYPD identifies person of interest in NYC subway shooting and reveals he made ‘concerning posts’ on social media about homelessness, New York and Mayor Eric Adams: Cops say 62-year-old rented the U-Haul connected to the attack, and other top stories from April 13, 2022.

It is unclear if the women had sex with the same transgender inmate, or if it was two different inmates. Edna Mahan houses 27 transgender prisoners, and over 800 women altogether. It is also unclear how far along the two inmates are, and whether they plan to continue with their respective pregnancies. An investigation has been launched.

The correctional facility began to house transgender women – including those that have yet to undergo gender reassignment surgery – last year.

That came as part of a settlement following a lawsuit brought by a trans woman and the American Civil Liberties Union (ACLU) of New Jersey.

ACLU legal director Jeanne LoCicero defended on Tuesday the policy, saying it ensured the rights of trans prisoners were not violated.

‘[It’s] in line with New Jersey’s strong anti-discrimination laws that prevent discrimination and harassment on the basis of gender identity,’ she told local news outlet NJ.com.

Edna Mahan, the only women’s prison in the Garden State, does not require transgender inmates to proceed with reassignment surgery in order to be housed at the correctional. 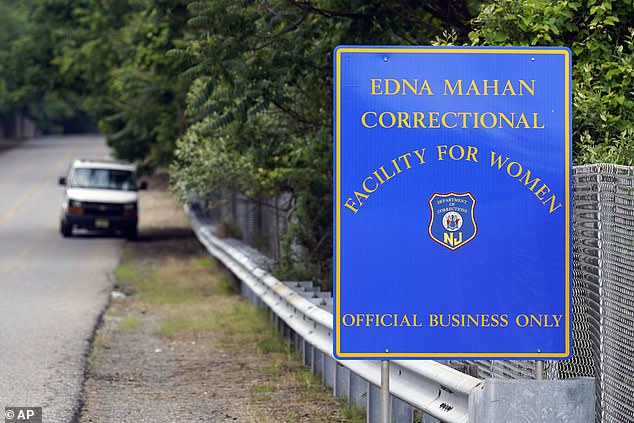 Two females incarcerated at Edna Mahan Correctional Facility, in Clinton, New Jersey, became pregnant after having consensual sex with at least one transgender inmate, the Department of Corrections said. The correctional facility began to house inmates by gender identity last year, after reaching a settlement in a lawsuit brought by a trans woman and the American Civil Liberties Union (ACLU) of New Jersey

ACLU legal director Jeanne LoCicero defended on Tuesday the policy, saying it ensured the rights of non-conforming prisoners were not violated

‘While DOC cannot comment on any specific disciplinary or housing decisions that may be considered in light of these events, the Department always reserves all options to ensure the health and safety of the individuals in its custody,’ Sperrazza said.

In 2021, two Edna Mahan prisoners filed a lawsuit seeking for the gender identity policy to be revoked, after they were allegedly harassed by transgender prisoners.

The women also claimed the transgender inmates were engaging in sexual activity with cisgender prisoners.

Critics of the settlement with the ACLU argue that the measure is yet another burden for a state prison that has seen alarming reports of abuse and rape by guards throughout the last decade.

The union representing correctional officers at the facility issued a statement decrying the policy allowing transgender females to be incarcerated at Edna Mahan.

‘We opposed this policy change believing it would be detrimental to the general population of female inmates being housed at Edna Mahan and also bring added stress to our correctional police officers assigned to this institution,’ the union’s president told NJ.com.

Transgender, intersex and non-binary people in state prisons, most importantly by housing them based on the gender they identify with rather than by sex assigned at birth.

Inmates can provide information about their gender identity at any time during their incarceration, under the policy.

Other protections include single-cell housing while final housing determinations are being made; being able to shower separately from other inmates; the right to have input into housing decisions and to appeal those decisions, and a prohibition of physical examinations to determine an inmate’s genital status.

Pat-down searches or strip searches by transgender women by male officers will be prohibited. The policy will be maintained for at least one year, according to the ACLU.

Under terms of the settlement, the woman, identified in court papers as Sonia Doe, also received $125,000 in damages and $45,000 for attorneys’ fees, and won’t face any sanctions in connection with an assault that occurred in prison in May 2019.

‘When I was forced to live in men’s prisons, I was terrified I wouldn’t make it out alive. Those memories still haunt me,’ Doe said in a statement last year.

‘Though I still have nightmares about that time, it’s a relief to know that as a result of my experience the NJDOC has adopted substantial policy changes so no person should be subjected to the horrors I survived.’

Powered by WordPress | WP Magazine by WP Mag Plus